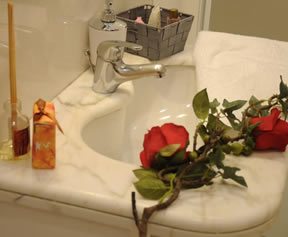 While our delightful B&B accommodation in Rome is well-placed in the district of Monti, you’ll be pleased to know we’re also very close to Metro Cavour, which means you can also get to other parts of the city in a jiffy. If you don’t fancy walking down to the Colosseum, you can take the metro one stop!

The "centro storico" or historical centre of Rome is the area within the ancient city walls, stretching from Porta del Popolo in the north down to Porta San Paolo in the south and from Porta San Giovanni in the east to the Vatican City in the west. You could walk from one side to another in about an hour. Or you can take the City-Hopper open top bus!

If arriving at Fiumicino take the Leonardo Express train to Termini - this operates more or less every half hour during the day. If arriving late there is a coach service by Cotral or numerous taxis. From Termini take the metro one stop to Cavour and from Cavour simply head up Via Urbana and then take a left onto Via Panisperna - we’re at number 94 on the right hand side.